- November 23, 2016
I love kormas. Every place makes them a bit different obviously but my favourites are the sweet ones with a rich creamy gravy. Since I like it so much I thought why not try it especially since I had this box of korma masala lying in the fridge since three month.

Normally my prep includes researching the same recipe on various website. But this time I decided to try the one on the back of the box. What could go wrong with that... or so I was foolish enough to think. 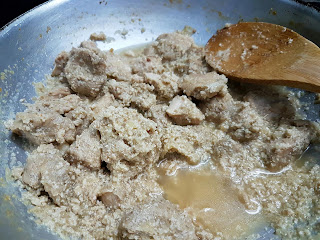 I started with cleaning out the chicken and dicing it. I followed all the steps as instructed on the box. At one point it said to cover the chicken and leave it for 15 minutes or until the oil/fat rises to the top.
I check after 10 minutes and the gravy had split completely. I retraced all my steps and realised that I had not done anything wrong and really couldn't figure out why it split.

Eventually I did what I do best. I fixed the problem. I took out the chicken pieces and dried up the gravy in a frying pan and then made kati rolls out of it. For those who don't know, kati roll is pretty much a wrap. You take a roti, put your chicken/paneer/veggies, add some onions, chutney, coriander, a dash of lemon and then sprinkle some chaat masala (optional) and viola!

After some googling I found there are a number of reasons why the gravy could split like, the cream or yogurt was too cold, the sauce was too hot, or it just splits for no reason at all. So if you find yourself in a similar situation, don't worry because you know what they say "no point crying over split gravy."