- December 01, 2015
In a further sign of the significant role Abu Dhabi has played in Star Wars: The Force Awakens, twofour54, Abu Dhabi’s media and entertainment hub has confirmed the Emirate will play host to the Middle East premiere of the film on December 16 at Emirates Palace.

Commenting on the announcement, twofour54’s CEO Noura Al Kaabi said “Having Star Wars: The Force Awakens screen in Abu Dhabi prior to its general release is a real validation for how successful the filming was whilst the production was here. To date, all of the trailers and TV spots for the film have included scenes from Abu Dhabi, which have generated unprecedented excitement around the globe. We are very proud of our achievements and excited for audiences around the world to experience Abu Dhabi on the big screen”.

In Star Wars: The Force Awakens, Abu Dhabi plays Jakku, “a frontier desert planet in a remote section of the Outer Rim Territories” according to StarWars.com.  With assistance from twofour54 and the Abu Dhabi Film Commission, filming for the movie took place in the Emirate in May 2014 with over 650 crew working across two locations. 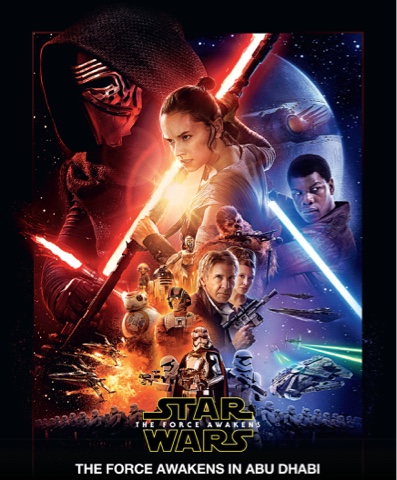 Star Wars: The Force Awakens, is the seventh installment in the franchise and is anticipated to be one of the most successful films of all time.

The Middle East premiere for Star Wars: The Force Awakens will be a red-carpet, invitation-only event brought to the capital by twofour54 in partnership with the Abu Dhabi Tourism and Culture Authority and The Walt Disney Company.
entertainment Hollywood Star Wars