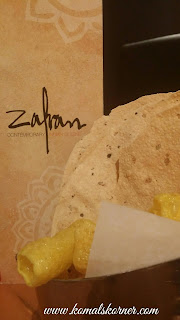 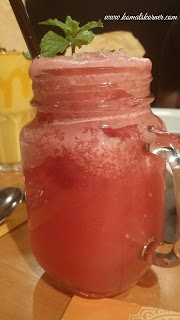 It's not hidden secret that I love trying out new food, but many a times I crave to get back to my roots. Its this craving that led me to Zafran, the contemporary Indian restaurant.

We were welcomed with a basket of papad and fried rice chips commonly know as 'fry yums.' Zafran has a wide menu of drinks, ranging from traditional Indian to contemporary of-course. We started off with a mango lassi (which has no added sugar) and a watermelon and mint smash for me. Both the drinks went down very well with our palate and the food (Tip - the lassi is quite heavy, so order your mains accordingly). 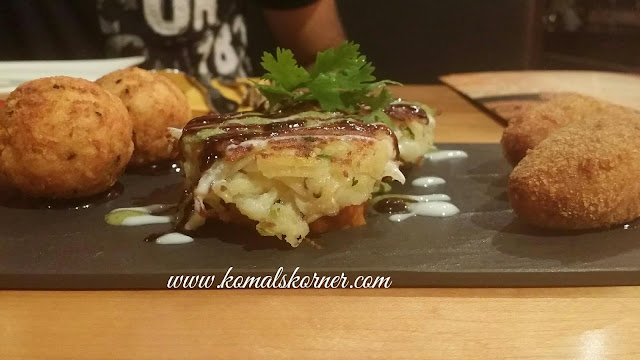 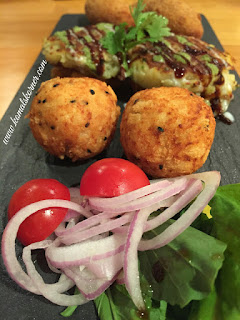 After the cool and refreshing drinks were served if was time to bring on the hot stuff. From the vegetarian starters we tasted the Dahee kababs, Aloo Tikkia and the vegetable chops. The Dahee (yogurt) kababs were super soft and all the flavours were incorporated into the dahee (this dish uses hung curd) and oozed out in every bite. Breaking into these kabas was like flying through clouds. The vegetable chop had cheese inside. The cheese was cooked to the right temperature, coupled with the spices, it made a very good dish. Both of these were mild on the spice, so its perfect for everyone. The third veggie starter was the Aloo (potatoes) Tikkia, the pan fried tikki (patty) was made with shredded potatoes served on a bed gravy masala chola (chickpeas) and drizzled with yougurt, a savoury mint chutney and a sweet tamarind chutney. For those who know Indian food well, this is more like the classic ragda pattis served in a upside down format. 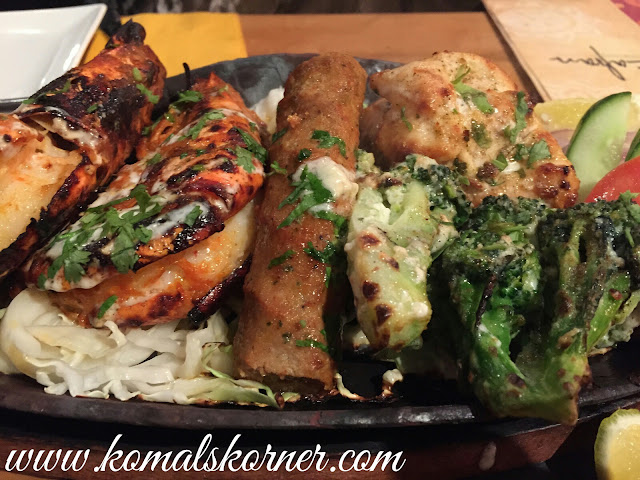 North Indian food is equally famous for its vegetarian fanfare as it is for its infamous tikkas. For the non - veg side the very friendly staff of Zafran suggested Tandoori king prawns, chicken malai tikka, Rampuri sheek kebab. The king prawns marinated in Indian spices and tandoori masala was high on flavour, but it wasn't cooked soft enough, so it was a little difficult to scoop it out. The chicken malai (cream) tikka and the Rampuri lamb kebab were both perfect! Not to strong on the spice, they were cooked to perfect and were so tender to bite into. Even though I don't eat lamb as much, this sheek kebab is definitely worth the exception. The non veg platter came with some steamed vegetables including broccoli which was just sprinkled with salt and pepper as per them (but I think there is more to that broccoli) and had a very creamy flavour. Maybe it was the malai from the chicken malai tikka that rubbed off, maybe it wasn't. I guess that will remain the in house secret. 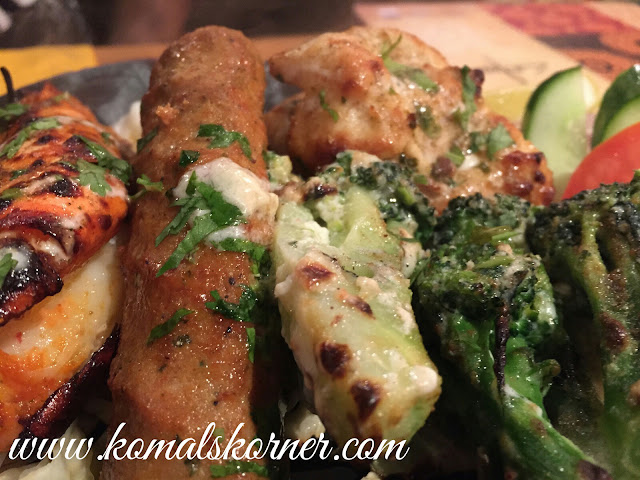 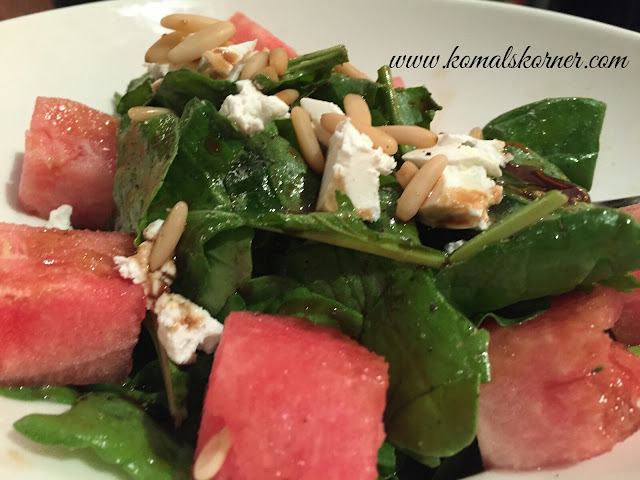 The rocket and feta salad was the perfect transition to the mains. Did I mention that it was divine? The toasted pine nuts and watermelon on a bed of rocket leaves and feta cheese was something I could eat everyday. It was fresh and one of the healthiest things we ate. Even if you are on a healthy eating diet, this salad is something you can easily include. Just make sure you go easy on the balsamic honey dressing. 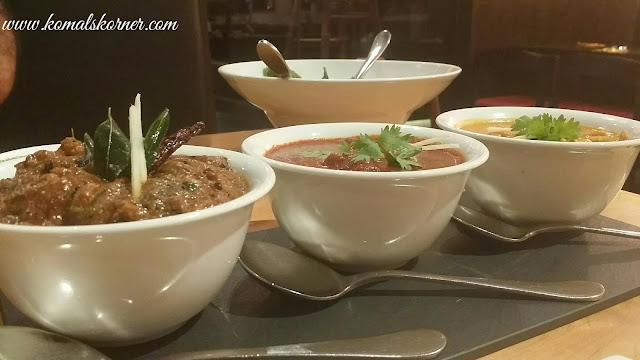 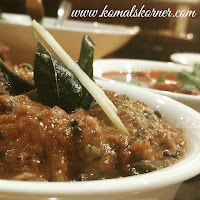 For the main course we had Zafran chicken curry. Kalimirch ka murgh, Lal Maas and Dal Bukari (vegetarian). The Zafran Chicken is made keeping in mind the Arab clientele the fills up the place. It was indeed perfect for me to, since I prefer less chilly in my food. The chicken was soo well cooked, it just broke as I dipped my roti into it. The Kalimirch was good, but a bit too strong for me. The Lal Maas has been made keeping the spicy food lovers in mind as it packs a punch. The delicious Dal Bukhari is also loving called the ITC daal by the staff since the chef who makes it served as the ITC hotels in Mumbai (the biggest surprise came when we found out that he is that the same chef was the chef at a particular ITC hotel during the years when four member of my family got married there now isn't a big coincidence!) 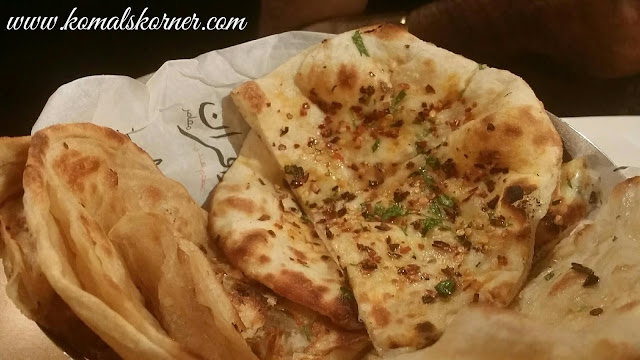 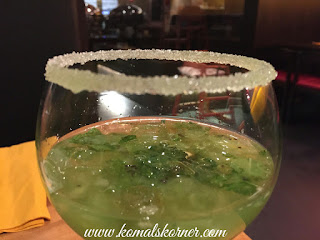 The Gravies were paired with different rotis from the bread basket, my fav was the garlic naan and the stuffed kulcha. Midway way dinner drinks consisted of  Kashmir's Dew and Kiwi Mojito. The twist on these was that instead of the normal salt rim they had a sweet sugar rim. These drinks were very light and go well with the strong flavours of Indian food. 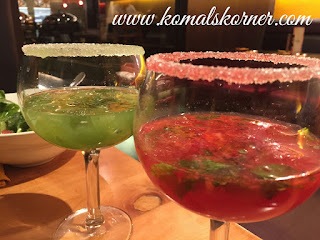 The curries and dal was followed by a Chicken Zafrani Biryani cooked in the traditional style with a roti on top. Two things matter in a biryani, the way the rice is cooked and how soft the meat inside is. In this case they got both the things bang on. 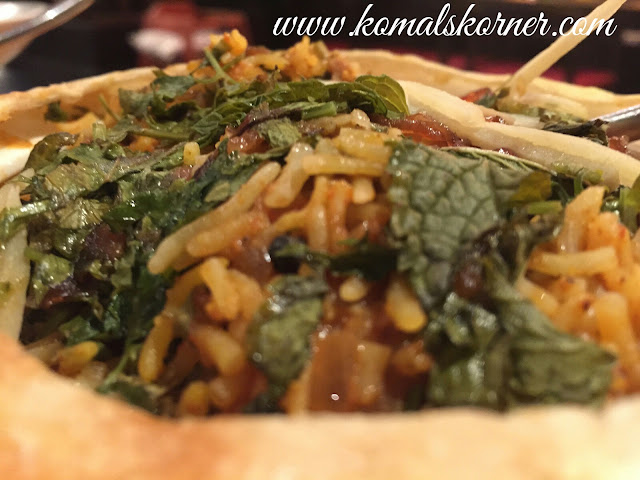 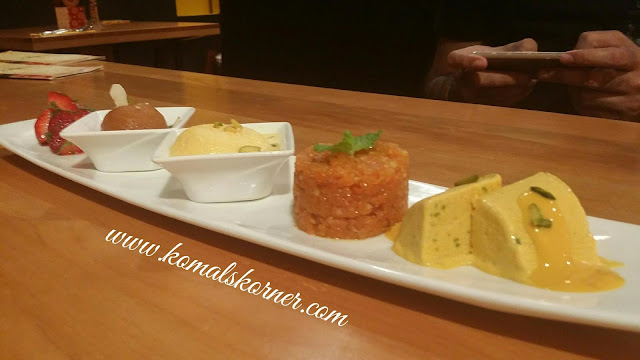 The desserts were all amazing. The only thing that I found a little off was the Kesar Pista Kulfi (Indian icecream with saffron and pistachio). I've eaten (and made) enough kesar pista kulfies to know that the flavour was a bit off. The (carrot) Halwa on the other hand was so good, reminded me of the one that my mom makes, and anything that hold a candle to mom's cooking can only be delicious! The Gulab Jamun and Ras Malai were both pretty good as well. 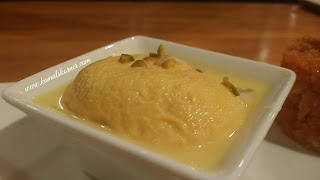 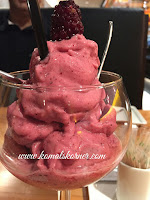 Another thing that we had for dessert was something from their drinks menu. This berry, icecream and youghurt concoction is called Berrylicious and it is very delicious! I was full upto my neck by the end of the previous desserts but I still could't refrain myself from eating/sipping this!

Zafran has two branches, one in Mirdif City Center that is featured here and the other in Dubai Marina Mall. I would definitely recommend the dahee kebabs, the chicken malai tikka, all the drinks we tasted and the gajar halwa. The menu is reasonably priced and you can get a discount using your Shukran card. Scroll below for more pictures. 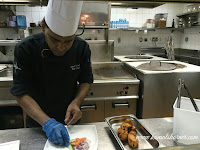 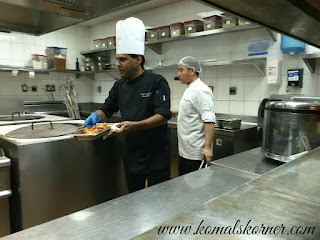 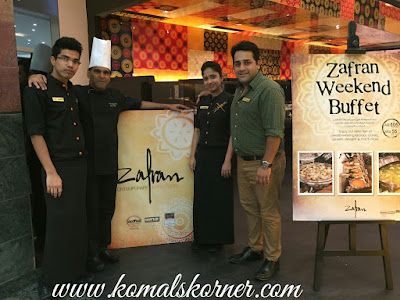 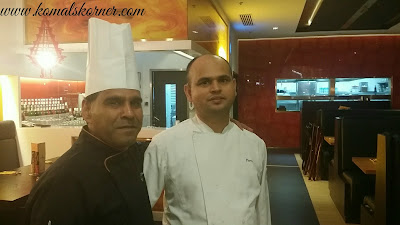