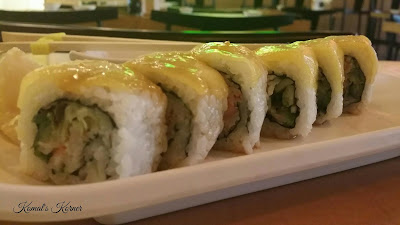 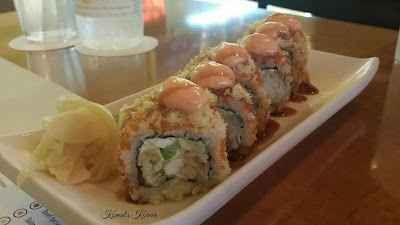 One of the reasons why I always avoided sushi was due to the lack of chicken options in most places and because of my first and (until now) last experience with wasabi. This happened a few year ago when I was studying in Canada. At a sushi workshop I learnt how to roll a perfect (vegetarian) sushi. After the workshop we celebrated our achievement by indulging in our freshly made concoction. Next thing I know (after following my friend's instructions) I had dipped my sushi in wasabi, without tasting it first. Only a person who has eating wasabi directly will know this feeling of the taste shooting straight up to your head, opening your sinuses and leading to a sensation worse than brain freeze! So as you can guess I had my reservations but I decided to leave behind my 'wasabi fear' and dive in when I was invited to try out their Ramadan offerings. We tasted two different orders of sushi, both of which were suggested by the Chez Sushi staff. One was custom made as per the chef's choice with avocado and cooked fish (I'm not a fan of raw meat) and the other was the Mango tango which topped with was smooth mango salsa. Both the dishes had a touch of mango, which made them taste similar, but yum none the less. They were fresh and the mixed filling inside gave it a good taste. This time I followed the rule of dissolving the wasabi in soy sauce and then dipping my sushi in it, and you know what, it wasn't that bad after all!

Moving on to the other things I tried that evening, first was the Prawn and Coriander Gyoza which was the perfect appetiser to start our evening. These grilled dumpling with their burst of flavour set the mood and bar for the dishes to follow.
Next was the Miso soup which was not to my liking but the mixed green salad with a ginger dressing was fresh and full with flavour compensated for the soup. The green beans tossed in spices was a nice thing to much on. It can be used as a fun replacement for otherwise unhealthy snacks we tend to much on during the day or while watching television. 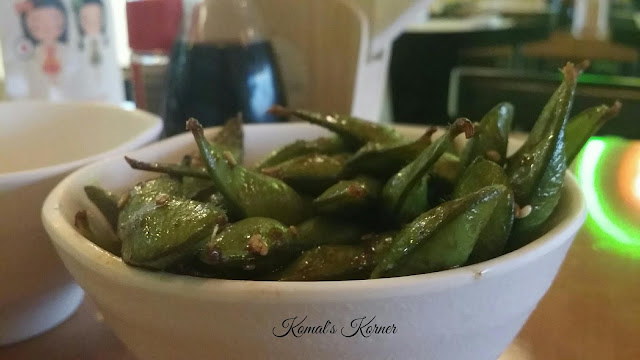 Then came the Rock Shrimp Tempura coated in creamy chili mayonnaise which were the rockstars of the evening. Served on a bed of salad, the shrimps were shelled in a crispy golden orange batter on the outside and stayed soft and crunchy on the inside and

I tried a number of things from the main menu along with the special iftar bento box which had chicken. Everything in the bento box was good expect the actual chicken. Even though it was dipped in a thick yellow curry kind of liquid it was still dry and utterly lacked moisture. 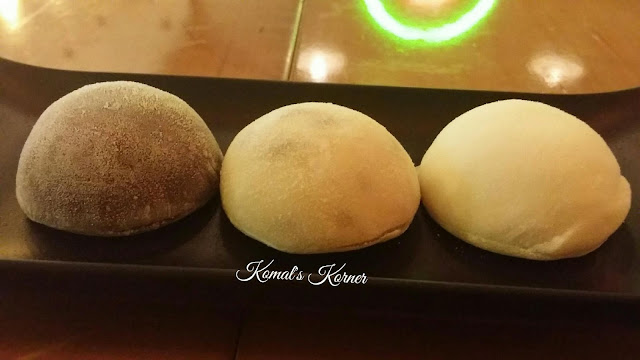 No meal is complete without dessert. Sticking to the Japanese theme of the menu the only dessert served here is the Moshi ice cream, which is regular ice cream covered in Japanese rice cake. These mini treats were literally a treat to look at. The absolutely adorable ice creams are availble in seven flavors and every portion you order includes any three flavours of your choice. The dark chocolate turned out to be my favourite for the evening. 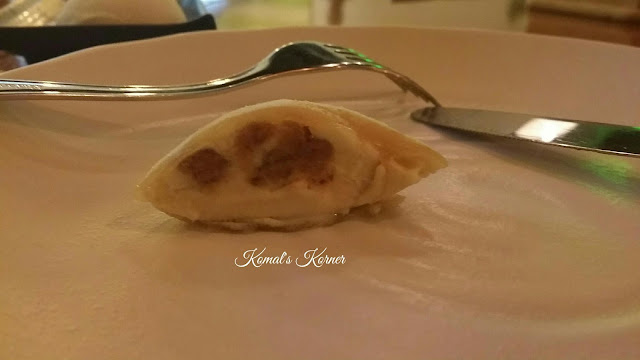 One of the things I simply loved about the restaurant was the fact that they stocked Japanese Kitkat.. . how awesome is that! The flavours on offer are strawberry, green tea and of course wasabi! Wasabi's punching flavour was mellowed with the use of white chocolate, but the green tea was quite on the dot. 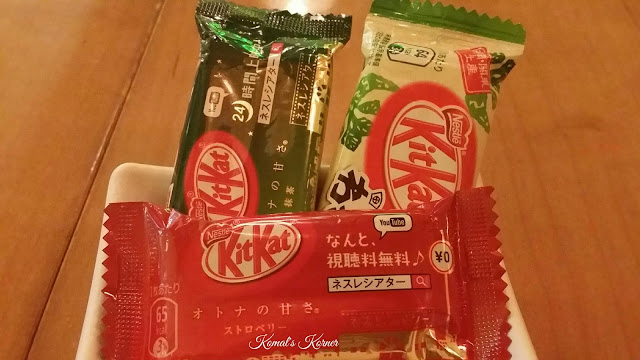 If you love sushi, or seafood then Chez Sushi is a must try, especially for their rock shrimps. They have a number of outlets throughout Dubai (none in Al Ain yet). For more details visit www.chezsushi.com.