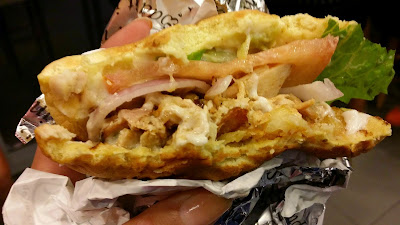 I love food experiments because they normally combine a few awesome dishes to make something new. Some times these experiments become things that are far from edible but sometimes the ingredients just fall in place to create a delectable balance of flavours. I tasted such an experiment last week at JF (formerly known as Just falafel) Street food called the Shawurger.
As the name suggests it a combination of a shawarma and a burger. Now this particular creation is more than just chicken shawarma pieces filled between a burger bun. According to Chef Gerard of JF Street Food, the bun used for the Shawurger is made using a of potatoes and is imported from the USA since nobody in the UAE could manufacturer them. Even though I try to support local products as much as possible for obvious environment reasons, I did love the taste of these buns which were soo soft. Tender chicken combined with lettuce, tomatoes, onion, pickels, French fries and drizzled with a garlic mayo sauce make the Shawurger one juicy treat. Available only for a limited time the chicken Shawurger is a must try!

P.S. I hope they start baking those buns in the UAE soon, which will make the Shawurger much more environment friendly ! 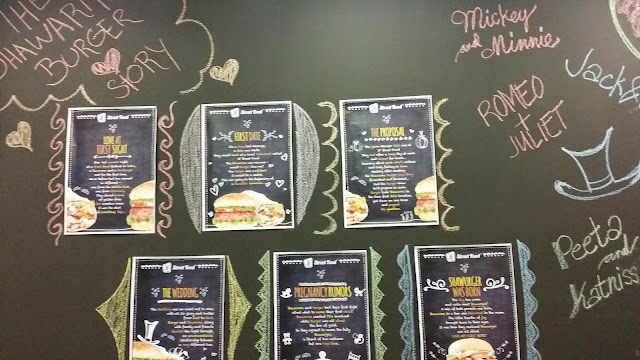 *Update -  I went down to this Ravi on July 1st 2015 and I was absolutely disappointed. The kebabs ans roti were both very dry. My friend ordered the mutton gravy and even that was less than average. Also they charge you for the very stale salad they serve. So if you still chose to eat there and don't want the salad let them know other wise they will serve it. Over all I would not recommend this resturant to anyone anymore. There are many Ravi's spread across Dubai, some serve great food, and most lack parking. If you are up for walking and in mood for yum kababs head to the head Ravi near Al Ain Center in Bur Dubai. But if you want to drive down and get a place to sit then Ravi in Satwa is the apt choice, because of a big parking lot right across.  I am not going to say much, if you are going to Ravi order the kebabs! Nothing else lives up to them. They are soft and succulent with flavour bursting in very bite. Be careful, they can be a tad spicy.  I've been he
Go on to the next page to discover more