Free bags draw in a crowd at Bebe

Bebe unveiled its latest Fall collection titled 'Bebe Urban Autumn' at the stores in The Dubai Mall and Marina Mall in Abu Dhabi and was certainly able to pull out a major crowd! How? Free gifts! as per the invite, the first 100 customers get a free tote, which they did, but, not without a fight!

Yesterday evening I made my way to the Dubai mall, on a friends suggestion to check out the event, which was scheduled at 7. I reached the mall at 6.30, leisurely strolling along enjoying myself. little did I know, what was cooking up outside the Bebe store, only to finally reach  there and a line of people (women mostly) spanning in both directions. With in the next 15 minutes the line had more than doubled, drawing confused eyes of shoppers from every other store, gathering a crowd which ended up blocking that section of the mall, which after some efforts was cleared up by the stores management team. I had some time to spare and I was alone so I decided to talk to some of the people in the line. Most of them told me the only reason there were there was for the bag and they are out. Bebe's event team seem to have foreseen this, for those who did get a token for the bag, could collect it only after 8 pm. While some discussed the event and how difficult it is to care of Bebe clothes (since most of them are tagged as hand wash) the younger ones seemed to be eyeing a gentleman in the grey jacket and blow tie inside the store, as he hurriedly moved around putting things in order.

Surprisingly the event did start on time unlike most fashion houses that have no sense or value for time, so that's a big brownie point as per me for Bebe. Soon the tokens for the first 100 customers were given out, which created a stampede like  situation, with people pushing, pouncing and literally snatching coupons from others. These guys sure made a noise with their event, other brands take note - free gifts, free gifts, free gifts! All jokes apart, I appreciate Bebe's effort in putting up this event by inviting actual customers rather than just media and celebrities. This is a great way to connect with customers where many other brands fail.

The event itself was quite interesting with an in store fashion show showing off their latest collection. I particularly like an full length evening gown in black and with its back fashioned with crystal elements. Some pieces were new and refreshing while the other were same as last season with few new touches. 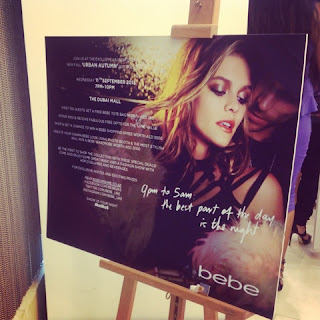 While some shopped most were busy enjoying the hors d'oeuvres and grabbing drinks by the dozen. There was a longer que for people want to get a glass than for trying on clothes, since all of it was being bought out from the trail room area. Food and drinks aside, there was a photo booth to keep the crowds busy, which once again managed to pull the crowd.

As the night went along, the crowds started to dwindle and what remained were the real shoppers, fashion blogger, models and me! The atmosphere was still vibrant with the dj spinning the party music, and the store having more room o breathe. Soon it was time to say good bye to the new friends I made, and old ones I met. By this time all I wanted was to get out of my six inch high heels and soak my feet in hot water. So the evening came to an end and twas was fun.

Moral of the story: There is nothing as a free lunch, but there is a free bag, well free if you don't count being pushed and stamped. Heels are sexy yet terrible for your back in the long run. Most of all don't be afraid to venture out alone, smile and be open to a conversation, you might just have a good time like I did.