- August 13, 2013
The long Eid weekend is over, and everyone is heading back to routine, even those to took a couple of extra days off to turn the long weekend into a summer vacation. Don't worry I will not go on about how much of a drag the week can be after a long weekend spent in leisure, instead I am going to share some of the interesting things from my Eid in Dubai weekend. Hopefully there are some things here you can try on the holiday.

The moment the UAE government declared Eid Al Fitr dates on evening of August 7th, we started to pack our bags, next after noon we were driving off to Dubai (if you recall my earlier blog, Ramadan is way more fun in Alain, but since I spent most of Ramadan in Al Ain, Dubai was the obvious choice for Eid), while the rest of my cousins including all my nieces and nephews made their way to Yas Water Park in Abu Dhabi.

For the first day we headed to Dubai mall, hoping to catch the latest bollywood movie Chennai Express. Due to the lack of top row seats we skipped the movie and decided to actually walk around the mall and do some shopping. BIG mistake! Though it was fun, the mall was packed to the hilt, they needed security guard to keep the escalators from over loading, every where I look there was a sea of people. For those of you who have lived of been in Mumbai, picture Dadar station in peak evening rush, just airconditioned and swanky. The mall literally had no space!! After a lot of walking around and some shopping, we grabbed a bit at the smaller food court (since the cheese cake factory was swamped), which surprisingly had many empty tables and then made our way back to the car and headed to an Indian restaurant in Karama. By midnight most of the family was tired, by my brother and me had to much energy to just go home and sit so we dropped our parents home and made our way to another mall for ice cream and movie tickets. 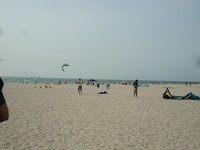 Day two was beach day, which for me means water and sand castles and lying down under a gigantic umbrella, but beach day for my family is a walk on the beach and lots of pictures, no getting sand in our clothes. Turns out beach day went their day but was fun none the less. Earlier plans were mamzar beach which shifted to Jumeriah at the last minute. We went to a less commercial part of the beach to take in the sun and well, the sun (I live in a desert, there is sun everywhere!). Dozens of pictures, redbulls and sandy swings (my niece did get sand in her clothes) later it was time to cool down at Souk Al Madinath aka 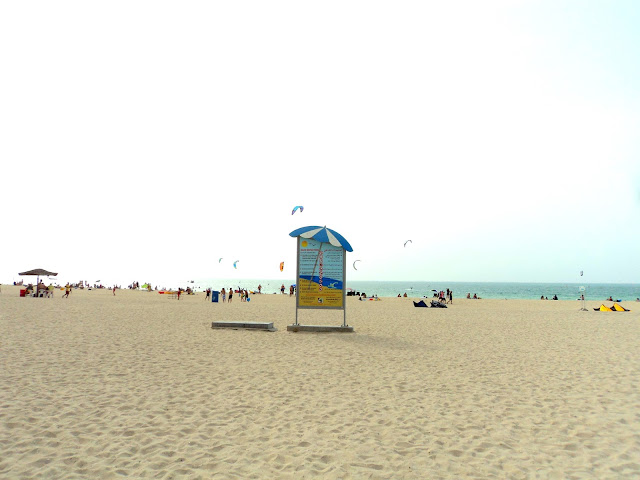 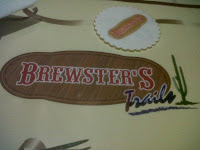 Madinath Jumeriah. Here in the comforts of air condition and tin crowds we leisurely walked around and settled at Brewster's. We dint order any brew, but of all the things we did order the french fries on the side of my brother's sandwich were the best thing. The service was like taking a boat from Dubai to Australia slow and the cheese on my nachos cold. I would not recommend this place, you are better off at Dome or Cinnabon for that matter which is also cheaper. A stroll down the promenade and we off to Mall of the Emirates (MOE) to kill time till dinner later at the Dubai Marina.

MOE though less crazy than the Dubai mall was still crowded, but finding a life size storm trooper costume, made my day (No I am still not a Star Wars fan), that and taking pictures with it, on the other hand slipping on a wet floor and being saved by my brother from banging my head into ski dubai, almost broke my day or rather my neck (The mall is going to receive a complain letter soon). That was when we new safest thing to do was leave the mall and head to marina. A large serving of crispy spinach chicken, chicken lollypop, and other chinese food later I was stuffed with just a little bit of space for dessert. ;)

Finally we dropped our parents home who were now exhausted and zoomed over to cold stone biggest sundaes and 'gotta have it' creations they have to offer. Once the sweet tooth was satisfied, it was time to give some attention to the Bollywood self inside us. This meant it was time for Chennai Express. Personally I don't absolutely love or hate Shah Rukh Khan (SRK), I prefer the script of the movie and the acting of the actors in portraying their characters rather than the actors themselves. Despite reading and hearing several bad reviews about the movie we went for it not expecting much than a no brainier (but not as terrible as Akshay Kumar's Tees Maar Khan). The movie turned out to be quite funny actually, with SRK casted in a role different from his usual ones. The movie had its moments throughout with interesting and catchy songs to add the music element that most Bollywood movies are incomplete without. These songs are still stuck in my head!

Day three was quite relaxed, we caught up on sleep and just chilled. With Duabi's heat, malls are the best options for an afternoon outing and this time we  picked Mirdiff, where we caught an arabic science show designed for kids to conduct easy experiments at home, unfortunately my brother was the only one who could understand it. Our last pit stop was the Dubai Outlet mall, which for once was open on our way back to Al Ain (it generally shuts at 10, but this time it was open till 12am). Finally we made it home, ready to crash after thoroughly enjoying the long weekend!

Moral of this story: Avoid Dubai Mall on all major holidays until the next big mall is made, then all the crowd will automatically go there. Plan in advance and make reservations (we did for the Marina restaurant) and wear plenty of sunscreen and carry enough water so you don't have to make pit stops again and again.